The University of Florida Center for Regenerative Medicine

The mission of the University of Florida Center for Regenerative Medicine (UF CRM) is to coordinate the discovery, development and delivery cycle of regenerative solutions to intractable disease across medical, surgical, and rehabilitation practices.

Building on the remarkable collaborative potential at the University of Florida, the center creates a world-class program to impact the lives of patients and their families. The Center for Regenerative Medicine catalyzes synergistic cross-disciplinary interactions among researchers and clinicians from the six colleges of the University of Florida Health Science Center, the Clinical and Translational Science Institute (CTSI), as well as the Department of Biomedical Engineering.

The UF CRM is dedicated to its mission while achieving these four goals: 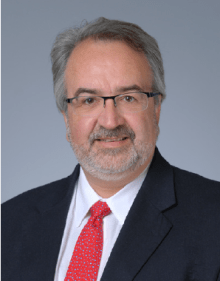 Keith L. March, MD, PhD, FACC, has dedicated his career to bringing new medical approaches to patients. His publications include more than 150 manuscripts. He was the editor of the first book dedicated to cardiovascular gene transfer. Dr. March’s research has resulted in more than 55 worldwide (20+ U.S.) patents, with others pending. He invented the Closer, a widely-utilized patented suture-mediated closure device, used to close the puncture wound in an artery following heart catheterization. This device allows a patient to “walk off the table” after a catheterization without requiring prolonged bedrest. In 1999, Abbott Vascular, an affiliate of Abbott Laboratories, acquired the company that developed this technology; and the Closer approach has been used worldwide to treat more than 8,000,000 patients. He has served as a scientific advisor to numerous pharmaceutical, biotechnology and medical device companies. Most recently, he co-founded Theratome Inc., based on a patented platform of technology originating in his laboratory that establishes the therapeutic factors secreted by stem cells as powerful therapeutics for critical medical needs, including degenerative and ischemic diseases of the nervous system. With FDA input, Theratome is pursuing this off-the-shelf approach to markedly reduce stroke and prolong quality life in ALS (Lou Gehrig’s disease), as two near-term goals.

His laboratory focuses on vascular biology, with a particular emphasis on the function and translational study of stem cells found in the adipose (fat) tissue, which his laboratory identified as cells with critical roles in blood vessel growth and control of inflammation. Dr. March is recognized as a leading expert in the field of adult stem cell research, particularly that involving adipose-derived stem cells. From 2008-2012, he was Chair of the National Institutes of Health Data and Safety Monitoring Board that oversees cell therapy trials in the areas of heart, lung, and blood diseases. In 2012, his center was selected as one of the seven Cardiovascular Cell Therapy Research Network (CCTRN) centers in the USA which would work together to conduct NIH-sponsored cell therapy clinical trials during a seven year period. He has obtained FDA approval to conduct two U.S. trials employing one’s own adipose-derived stem cells: one to avoid amputations in legs of patients with severe circulatory disease; and another to avert knee replacements in patients with severe arthritis.

In addition to his research roles, Dr. March has served as the President (2007) of the International Federation of Adipose Therapeutics and Science (IFATS), and continues to serve on the IFATS Board; and as the Chief Medical Advisor for the Cell Therapy Foundation. In both affiliations, he has worked to advance collaboration as well as public awareness about the significance of adult stem cells.